Trending
You are at:Home»Open Society»Integration»The UN Team in Brussels runs Together for Migrants and Refugees

The 20km Brussels half-marathon is a major annual event that shuts down the capital of Belgium and gets the heart of the European Union beating. On Sunday 28 May, over 40,000 runners and walkers from 131 different nationalities gathered at the starting block, and the UN in Brussels “Migration Team” was right there with them fronting the TOGETHER Campaign in a united show of support for diversity, migrants and refugees.

Under the banner “TOGETHER let’s promote respect, security and dignity for refugees and migrants” the UN Migration Agency (IOM) in partnership with the UNRIC organized a team of 50 people from 15 different nationalities – many with a migration profile – from the UN agencies in Brussels, the European Commission, the Belgian Ministry of Foreign Affairs, members of the civil society, and the general public to run the 20K’s 38th edition.

Caroline Petit, Deputy Director of UNRIC in Brussels, remarked that sport is one of the best ways to come together and share the values of courage, effort, competition and participation. 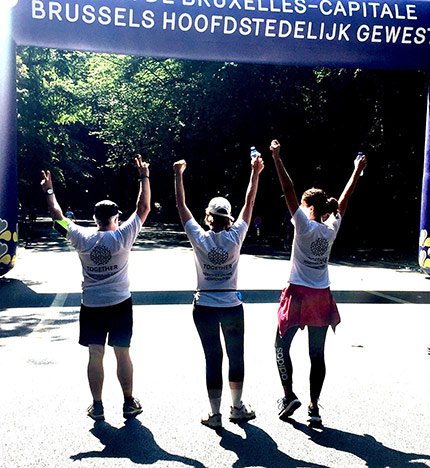 “We all hope and fear the same things in life, no matter where we come from. This sameness must be realized by those that fear the other, such as migrants and refugees, and I think the TOGETHER-campaign greatly contributes towards cultivating that shared mind-set,” she said before joining her teammates and thousands of others at the starting gate.

The UN team was based at a stand located in front of the iconic Cinquantenaire Arch to provide a space for discussion, information on the Together and “I am a Migrant” campaigns, as well as UN activities in Belgium, Europe and world-wide. Balloons, bracelets and bags were free for the public.

*Caroline Petit has been the Deputy Director of UNRIC, the United Nations communications hub in Europe, since 2013. Based in Brussels, she is also leader of the TOGETHER campaign, the initiative that was launched in September 2016 at the UN Summit on Refugees and Migrants and that aims at changing negative perceptions and attitudes towards refugees and migrants.

You can read the original article here.