Trending
You are at:Home»Interviews»Legal pathways for migration. Interview with Eugenio Ambrosi, Regional Director of IOM’s Regional Office for the EU, Norway and Switzerland

In recent times, Europe has been facing what has been called as a “migration crisis”. Some of the newcomers use irregular paths to enter European soil. This comes attached with several risks for their lives. The IOM, the International Organisation for Migration, is making efforts to enhance alternative pathways to irregular migration.

During the European Development Days, Eugenio Ambrosi, Regional Director of IOM’s Regional Office for the EU, Norway and Switzerland, discussed with The New European the best ways to mitigate irregular migration and the need to build partnerships with the countries of origin. 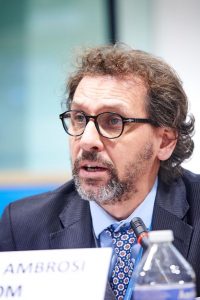 One of the priorities of the Joint Action Plan agreed by African and EU leaders during the Valletta Summit (November 2015) is to fight irregular immigration. How much progress has been made since then?

When it comes to addressing irregular migration, a lot of progress has been made. Instead of just taking unilateral actions, now there is an effort to build partnerships with the countries of origin.

In the past of every country, there were moments were people had to rely on irregular means in order to survive. For instance, during the Nazi occupation of France, people used smugglers to get out of the country. That was their only option as it was forbidden to leave the country.

As long as there are no legal pathways, the results in reducing irregular migration will be relatively modest. It is not enough to say: “you cannot come, because it is too dangerous and you are going to be sent back.” People that need to leave their countries right now, because they are fleeing violence, instability or poverty, will leave anyway, no matter what.

Who are IOM’s key collaborators in this plan of promoting safe and legal migration?

Our organisation tries to act as a catalyst, in order to bring together all the partners and actors that can contribute in one way or another.

IOM works with the other “members” of the UN family, which are directly involved in migration and refugee issues, or which are more focused on labour or counter-trafficking issues. Likewise, IOM works with civil society organisations, in advocacy matters and cooperation on specific operations. Another collaborator is the private sector. Finally, the IOM works with employers’ associations and with unions that deal with migrant labour issues at the global and local level.

What is the specific involvement of NGOs in your programs?

In the past several years, our work with NGOs has increased. For a while, there was a certain lack of knowledge on what the IOM was and its work. This might have had as a consequence the fact that NGOs did not think about working with the IOM. But now things are taking a positive turn.

At this moment, IOM is discussing with the Community of Sant’Egidio (an Italy-based Catholic charitable community) about whether we can support some of their initiatives that deal with alternative pathways for resettlement.

For the last couple of years, the Community of Sant’Egidio has helped a number of Syrian refugees to come to Italy under a sort of private sponsorship. Without the charity, these refugees would not have taken part of the regular identification and selection process for resettlement.

IOM has already worked with the Community of Sant’Egidio in 1992 in Mozambique, where they were involved in the peace process.

At a local level in the countries of origin of migrants, what are the instruments deployed to convince them to seek legal migration alternatives?

Communication is an important tool. IOM carries out a variety of communication activities, public information campaigns and awareness campaigns.

In some areas, we work with local communication outlets, such as journalists, radio and other types of media. Furthermore, we are increasing our presence on the social media, which is one of the most powerful tools right now to pass messages.

Communications is effective if you can offer an alternative to simply saying “look, it is too risky to leave your country”. Of course, there are some very limited legal pathways; communication allows you to pursue those.

In addition, communication is needed because if you do not offer an alternative legal pathway, there is very little that you can actually offer to the people who are contemplating moving.

In the countries of origin we often refer to the contribution of remittances that migrants send back. In certain countries, these contributions are enormous and have a positive effect by helping individual family groups or communities coming out of very low level of livelihood.

In addition to that, a fact that is not very often considered is that nowadays most migrants, whether they migrate regularly or irregularly, do not plan to stay forever in their country of immigration. They plan to go back home.

If they are able to do so, once it happens there is a further level of innovation and novelty that is brought back to the country of origin by the migrants returning, for instance skills that they have learnt during their migrant experience. Therefore, we should not limit the positive effect of migration to its economic content; it consists also of an important transfer of skills and abilities, which allow for the longer term development of the countries of origin.