Trending
You are at:Home»Open Society»Integration»Integration through sport: the experience of Kraainem football club

That sport can bring people together is a widely shared universal truth. But can it be a vector of integration? This is what the Kraainem football club, based in a residential neighbourhood just outside of Brussels, wants to prove. The club offers a program that has the potential of being revolutionary, in its simplicity: three times a week it receives a group of young refugees and asylum seekers, offers them French classes and have them play football in the club’s teams.

The Kraainem project does not leave anything to chance. Education, socialisation and mutual understanding go hand in hand. “We welcome up to ten children refugees between the age of 10 and 18, three times a week”, explains Benjamin Renauld, the manager of the program and a student of political science. “First, they have an hour of French classes, provided by volunteers and depending on the level of French they already speak. After the course, they play football; we don’t have separated teams, since it is important for us to integrate them into the existing teams. We divide the refugee children in small groups depending on their age and we make them play within the existing teams, even providing them with the same uniforms as everybody else.” Finally, after the match children and trainers share a meal together. “It is an opportunity for them to communicate with us, tell their stories and feel welcome”, explains Benjamin.

The programme, which has been established in 2015 in collaboration with Fedasil (the Belgian Federal Agency for the reception of Asylum Seekers), has already received support from a series of private and public institutions: among them, the European Commission, the UEFA Foundation for Children and the Belgian-based King Baudouin Foundation, together with ENGIE, a long-time sponsor of the club. Last year, the children also received the visit of Dimitris Avramopoulos, the European Commissioner for Migration and Home Affairs. “The support of these institutions is very valuable”, says Benjamin, “because without it, we would not be able to provide the children with the same high quality of services, from food to the uniforms.” 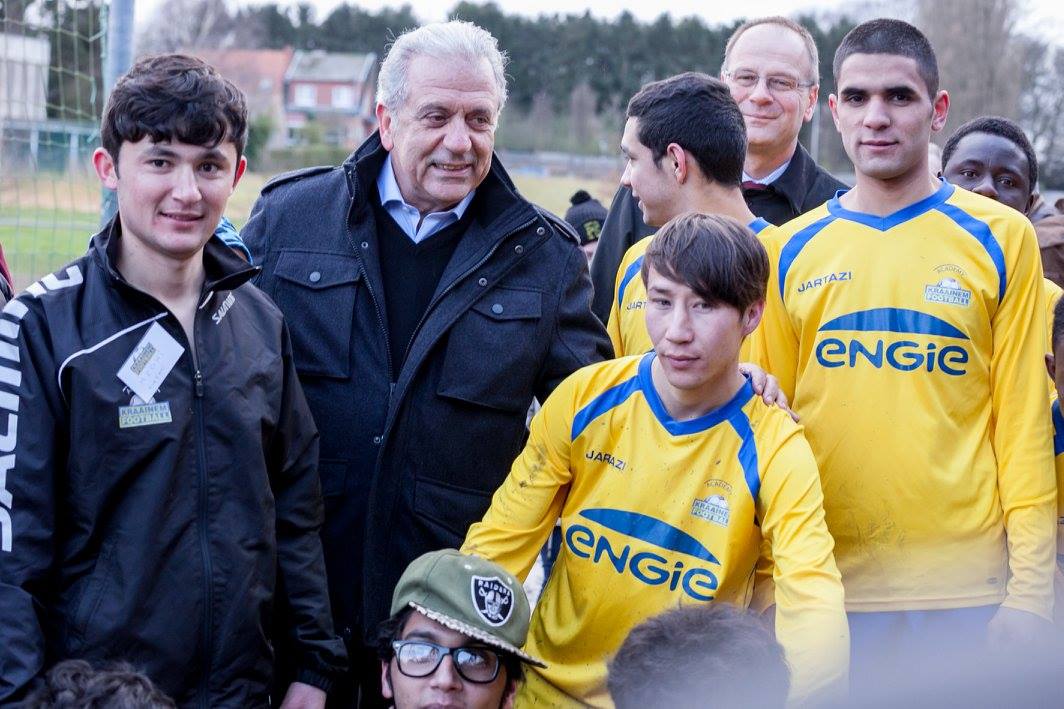 Nevertheless, still some issues affect the program. One of them is the number of children who can participate: the size and structure of the club allows it to manage just a handful of children at a time. “As much as we would like to, we can manage just no more than 10 children every time”, Benjamin tells us. “We are still, first and foremost, a football club. It is difficult for coaches to be able to have a big number of new children every time in their teams.”

A second bottleneck is the great variety of children the club deals with. A variety which is well represented by the varying typology of reception facilities the club works with. The first one is the centre of Woluwe-Saint-Pierre, a neighborhood in the outskirts of Brussels which currently hosts around 30 children: it is a centre of first reception, where asylum seekers arrive and are identified, before being relocated to longer-term facilities after three or four weeks based on their nationality and status, as Ruth De Ruyter, the centre’s director, has told The New European. As a consequence, it can be difficult for children to establish a long-term relationship with the football club. In the majority of cases, they come just a couple of times before being relocated somewhere else.

The situation is different in a second centre, located in the town of Rixensart. There, asylum seekers are hosted while waiting for their status to be determined. As such, the periods of permanence are much longer, as they go from six to twelve months, on average. The Rixensart centre pays particular attention to minors and families: as his director, Thierry Pire, points out to The New European, the centre has a capacity of 170 places, of which 50 are reserved to non-accompanied minors, while the remaining 120 are split between single men, women and families. Centres like Rixensart is where the integration can really start, and children can have a longer relationship with the club. “Sometimes, it happens that some children are moved from Woluwe-Saint-Pierre to Rixensart”, explains Benjamin. “This is good, because it means they can come and play throughout the whole year”. While the difference among the two groups is sometimes challenging, it is an integral part of the project: “we have children who live with their parents, and others who are unaccompanied. Some who can already speak French, and others who cannot. It is fundamental that we see both aspects, and how integration works at different levels.” 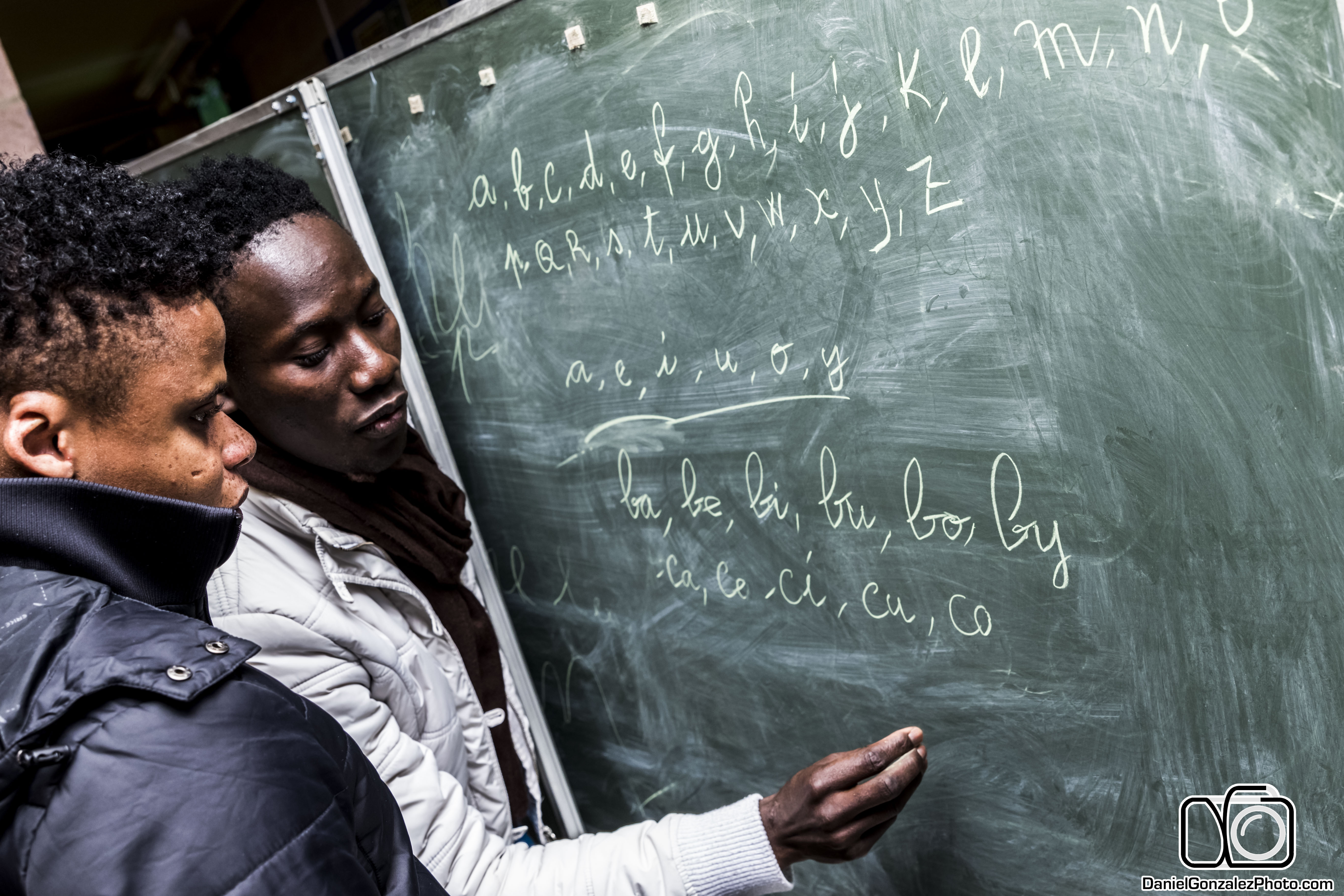 Asylum seekers during a French class at Kraainem

To meet these challenges, Kraainem is now looking to expand its idea to other good-willing clubs. “There is a lot of interest in replicating the model elsewhere”, says Benjamin. “We are currently working with the Belgian Football Association in order to find for new clubs. The first initiative, in Molenbeek, already started in September. Our goal is to have, by the end of 2017, between six and eight clubs start similar programs”.

Even if the programme is raising interest, Benjamin keeps a healthy dose of realism on its impact: “the narrative on migration is a huge problem at the EU level, and we do not have the power to change it”, he says. “It will take a lot of time and effort, since we need to learn to separate facts from emotions”.

Nevertheless, real change takes place at the local level, growing integration from the ground up: “the most beautiful thing is that we give the children the possibility to mingle with each other. We are there to favour contact and integrate them on the field. Then, if a kid from the club one day goes home and tells his mother he played with an Afghan child and has learnt his story, thus creating mutual understanding, our work will be successful”.