Trending
You are at:Home»Open Society»Integration»Crossroad of Europe and Belgian Melting Pot

When he was still a student, Mohamed Ouriaghli was very involved in community life. “I would often meet up some friends at a Youth Centre in Molenbeek (neighbourhood in the North of Brussels, typically known for its ethnically diverse inhabitants)”, he remembers. The Centre carried a very innovative project: they wanted to put youth representatives in the Participation Council of the commune. To cut a long story short, he was elected by his friends and was to represent them in the Administration Board.

In 1991, riots stroke in some neighbourhoods.  This was the catalyst needed by Ouriaghli and the Youth Centre he was responsible for to think through on why such tragic events can happen in our societies and on how to better integrate these youngsters into society. Together with another Youth Centre (based in Forest), they eventually came up with a ground-breaking project: they would meet people from other places and see how things are dealt with elsewhere.

All of a sudden, it became obvious that criticising political bodies was not the way forward, but enrolling to a party was. “It was going to help me genuinely act and be the spokesperson of my cause, of what I wanted to fight for”. Ouriaghli political success-story officially started in 1993, when he was elected local councillor in the City of Brussels for the Socialist Party (PS), one of the youngest ever. Rapidly he decided to get even more active. From 1995 to 2006 he was appointed Communal Advisor and from 2000 to 2006, he was President of the Foyer Bruxellois (political organ of the City of Brussels aiming at facilitating the access to social housing to those in need). “I have always been sensitive to social housing –I lived in public housing, even after my election. I made it a specialty, my warhorse.”

A Melting Pot of cultures

Mohamed Ouriaghli explained that he and his brothers are very familiar to immigration. Their father immigrated three times in his life: first from the Riff Highlands to Tangier (Morocco); then due to economic problems caused by the Moroccan independence, he had to move to Hasselt in the Belgian Limburg –where the Ouriaghli brothers were born. And finally, they moved from Hasselt to Brussels, since their parents wanted them to learn French, convinced that –as many migrants at that time– they were going to return to Morocco. “I am a child of a multiple immigration, hence my defining myself as a melting pot.” 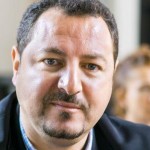 Fully taking advantage of his colourful background, Ouriaghli does not consider himself as being somewhat restrained by them. On the contrary, it is something he has always been genuinely proud of: “I embrace my different cultural and linguistic backgrounds for they have shaped me and for they are my biggest assets.” Multiculturalism is a means to develop oneself both personally and professionally. Unfortunately, some people are fairly reluctant to migrants and little incline to advocate for equality of chances and inclusion.

The praise of ‘the successful brother, uncle and father’ has died out over the last decades and the younger generations can no longer look up to them. “Because of the crisis, people of my generation, no matter how brilliant they are, had to face the lack of job opportunities and have been, yet againconfronted to the inequality of chances when it comes to job access. This is sadly why engineers with a migrant background ends up being a taxi driver”.

Created in the late seventies, the CBOE (Comité des Bruxellois d’Origine Etrangère) was one of the first Advisory Board dealing with immigration. Immigration is a part of our reality, and always will. Society has changed, so have our priorities and views on migration. “What is the point of calling an immigrant someone who has lived in Brussels for twenty, thirty, or in my case 47 years?” reminds us Ouriaghli. This is why a brand new name, embodying intergenerational migrants, was needed –so was born Brussels’ Council for Cultural Diversity.

Through hard work, four annual plenary sessions and campaigns, the Council has implemented different policies advocating for equality of chances. People with a migrant background can benefit from different workshops at their disposal to help them tackle the gap between ‘them’ and the native-born and become key players of the evolution towards a better society.

Benefitting from the European Institutions, Brussels is certainly not the bottom of the class when it comes to welcoming “new Belgians”. Change lies at the grassroots level, hence the Council’s focus on youngsters, for “they are the future of our society”. Through the establishment and the management of “Ateliers d’aide à la réussite” (workshops that help people in need be more successful in life by offering education, training…), the Council for Cultural Diversity aims at touching people from all nationalities and raise awareness.

“We shouldn’t be afraid of diversity. This fear of the ‘other’ is our main obstacle. If we could get rid of it, it would be a great victory for us. We should be driven by the same simple motto: ‘different yet equal’.”

This post is an extract from an article published in issue 3 of UNITEE’s magazine, The New European, entitled “Divercities”. The complete online version can be read for free here.